So how do gliders fly without an engine?

The airflow over the wing of an aircraft produces an upward force capable of supporting the weight of the aircraft. In a powered aircraft, the engines propel the aircraft through the air to produce this airflow. Gliders (without engines) create this airflow by continuously descending forwards. 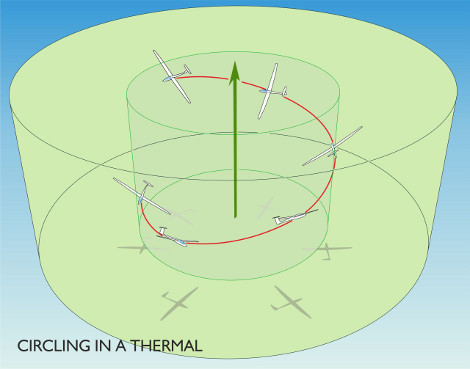 So to stay airborne, gliders need to find air that is going up at least as fast as the glider is descending. Here we can learn from the birds...

The word soaring is often used interchangeably with gliding when referring to the sport. However, more precisely soaring is the art of using air currents to stay airborne.

The action of the air in keeping the glider airborne or even gaining height is called (rather unimaginatively) 'lift' and there are four main sources of this precious commodity which the glider pilot can use. 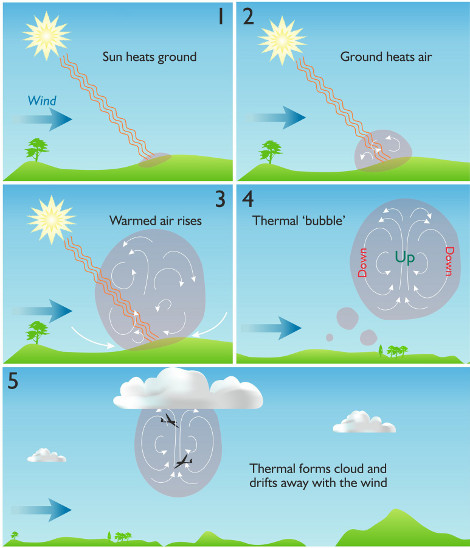 On a summer's day, you can see birds circle upwards without flapping their wings. They are "thermalling". A thermal is a volume of air that has been heated by the sun more than the surrounding air - imagine if you were standing on some sunlit concrete, you would feel warm! As you know, hot air rises, and it is circling within this air that allows birds - and gliders - to go upwards. Next you may ask "so how do you know where the thermals are?". Well, sometimes this is educated guess work, based on how you imagine ground features below you are warming up. However, often cumulus (cotton-wool type) clouds form at the top of the thermal, marking where the thermals are.

Occasionally, you may be joined in the thermal by a bird - from a swift to an eagle. You can never do it as well as they can, but it's great fun trying! Thermals are used in cross-country flying - you climb in a thermal to gain the height to move forwards to the next thermal on track (or thereabouts). The largest flight in the UK was done like this. Just over 1000 kilometres were covered in the flight which took about 10 hours. The longest thermal cross-country flight from North Hill is just over 500 kilometres. 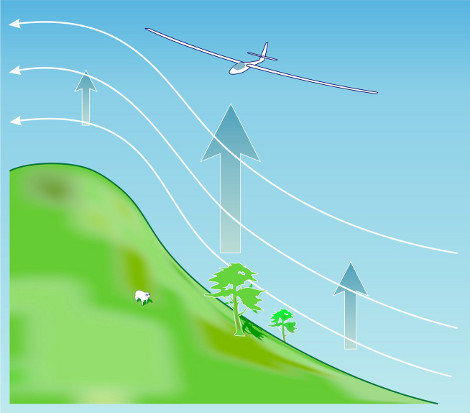 Another way of staying up requires a hill (ridge), and the wind to blow against the face of it. Try to imagine this scenario - when the wind hits the hill, it gets forced upwards. Again, it is this upward movement of air that allows gliders to stay airborne. With a long ridge, it's possible to do large distances without turning, generally flying fast and low to stay in the best "lift" close to the ridge. North Hill has a small northwest facing ridge, and a very short south ridge, but it is possible to complete 5 hours for Silver Duration on the ridge. The ridge is also a good source for kicking off thermals.

Similar to ridge lift is a phenomenon called "wave lift". This is a little harder to imagine. It arises from the wind blowing against a hill again, but this time the air comes back down (on the far side of the hill) and "bounces" off the ground and goes back up again creating a very smooth upwards flow of air. Often, this form of lift is capped by a cigar shaped "lenticular" cloud.

This wave may go back down and up again for several cycles, meaning that you don't actually have to be close to any hills to use it! The furthest flights in gliders have been done using this lift - the best being 2900 kilometres which was done along the Andes, all in one flight and one day. Wave lift is also known to go very high - the world height record in a glider is just over 76,000 feet!   In the UK, 1200 kilometres  wave flight has been achieved in Scotland.

North Hill can get wave conditions from air over Exmoor and Dartmoor. 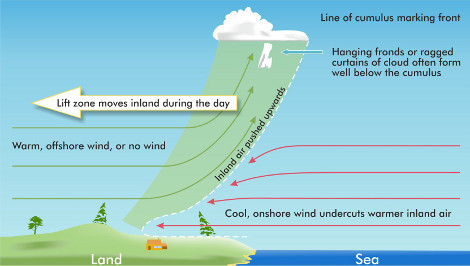 In the South-west peninsula, we are fortunate to benefit from coasts to north and south within range of North Hill. On many summer days when the land heats up faster than the sea, and in certain wind conditions, lines of convergence lift may set up parallel to the coasts. This provides the opportunity to fly along these lines into Cornwall or Dorset.

Many thanks to Steve Longland for all the illustrations on this page.